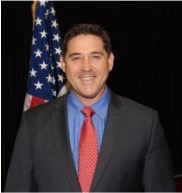 Mr. Christian (Chris) Isham is the MDA Advisor for the Border Police of Georgia, Ministry of Internal Affairs. He started this tour on 5 June 2021 after completing MoDA training in April 2021. As the MDA Advisor, he collaborates with Georgian and US interagency partners as well as NATO and other stakeholders to help coordinate, synchronize and align current MDA requirements in support of Georgian maritime security.

Mr. Isham is a retired U.S. Marine Corps Officer. Prior to the MDA assignment, he served in several Joint and Interagency assignments. Primarily, he has been involved with the DoD counter threat network effort since 2006 when he was assigned as the Operations Officer for the Joint Interagency Task Force West (JIATF-West), focusing on Asia- Pacific trafficking threats. Retiring from the Marines in 2008 as a Lieutenant Colonel, Mr. Isham remained with JIATF-West as the Assistant Chief of Staff for Plans and Policy. While there, he published two strategic business plans that included capacity building initiatives for both Indonesian and Philippine maritime police that were crucial to their MDA efforts.

In 2014, Mr. Isham moved to Washington D.C. to work at the White House Office of National Drug Control Policy as the Deputy Chief, International Interdiction Branch. While there, he developed the 2015 National Interdiction Command and Control Plan (NICCP) and helped coordinate the 2016 National Heroin Reduction Plan (HARP). He also helped implement strategic changes to the National Consolidated Counterdrug Database (CCDB). He joined HQ EUCOM in June 2016 as the DoD Counterdrug Program Manager and Deputy Director for USEUCOM’s Joint Interagency Counter Trafficking Center (JICTC). There, Mr. Isham focused on building the necessary strategic and operational partnerships with US law enforcement agencies and other interagency partners, working to counter illicit threat networks throughout the European theater.

As a Marine, Mr. Isham served as an artillery officer, serving in Operations Desert Shield, Desert Storm, and Enduring Freedom. As a Major, he served as the US Defense Attaché to Eritrea, followed by high-level staff assignments at MARFORPAC and USPACOM where he was involved with theater security cooperation, coalition building, and strategic planning. While at MARFORPAC, he served as an LNO to Singaporean and Indonesian partners during Operation Unified Assistance.

Mr. Isham has earned a Bachelor of Arts in History from UCLA, a Master of Arts in National Security Affairs from the Naval Postgraduate School, and a Master’s in Public Administration from Villanova University. He has also served as an Adjunct Faculty for Marine Corps University, teaching first-year students of the “Marine Corps Command and Staff” Program and also as an Adjunct Faculty at Hawaii Pacific University, where he taught graduate seminars “A Contemporary History of Transnational Organized Crime” and “The Evolution of Smart Power.”