The Jakarta Post - US to get involved in RI military

Indonesia and the United States have stepped up their defense cooperation with the signing of an agreement under which the former will get more support and assistance from the US in planning and managing defense strategy.

On Wednesday, the Defense Ministry and the US-based Defense Institution Reform Initiative (DIRI) signed a memorandum of understanding (MoU) allowing the latter to help formulate strategies with the aim of enhancing the performance of the Indonesian Military (TNI) from 2015 to 2019.

“In 2014, DIRI helped draw up Indonesia’s strategic defense planning for 2015 to 2019. DIRI provided valuable input to the Defense Ministry, to TNI headquarters and to each of the three forces,” Defense Ministry secretary Lt. Gen. Ediwan Prabowo said during the signing ceremony at the ministry in Jakarta. In 2014, DIRI worked with the ministry’s directorate general of defense planning for a program related to strategic planning and budgeting.

Ediwan claimed that DIRI had offered some of the best solutions to problems faced by the TNI, from the strategic level to the practical.

“The DIRI programs are useful for optimizing the ministry’s resources,” he said.

On its website, DIRI claims to “develop effective, accountable, professional and transparent partner defense establishments in partner countries that can manage, sustain and employ national forces”. DIRI also provides “experts to work with partner nations to assess organizational weakness and establish a roadmap for addressing the shortfalls”.

US deputy chief of mission Kristen Bauer said that Indonesia and the US had strengthened their ties and established a comprehensive partnership based on mutual respect, common interest and shared values. “Our defense relationship is part of it and it has been stronger,” Bauer said after the signing ceremony.

Last year, Indonesia and the US shared 500 joint-exchange exercises and other activities in defense, and this year the number of joint activities is expected to rise under the DIRI programs.

Under the administration of former president Susilo Bambang Yudhoyono, defense cooperation between Indonesia and US vastly improved, with the US agreeing to sell military equipment — both new and used — to Indonesia, including three of the 24 units of F-16 Fighting Falcon Block 521Ds once used by the US National Air Force Reserves.

In 1991, the US Congress banned Indonesia from buying US weapons to upgrade its military weapons system following allegations of gross human rights violations in Santa Cruz, East Timor.

Military expert Mufti Makarim, meanwhile, lauded the defense cooperation between Indonesia and the US under the DIRI initiative.

“I hope that the cooperation between the US and the Defense Ministry will lead to further improvements in strategic planning and management, as the US is an expert in those fields,” Makarim said. 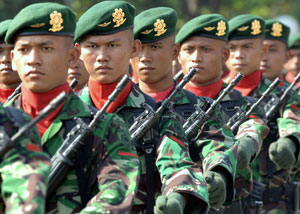